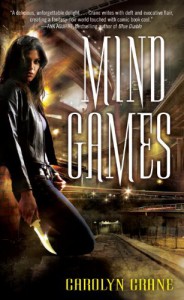 Mind Games is unlike any urban-fantasy I've read so far. It doesn't feature shape shifters nor vampires or witches. You won't find your 'typically' kick-ass heroine or at least someone who desperately tries to act as a badass in this book either. It also doesn't have any intricate love triangles, in fact the heroine properly breaks up with her previous boyfriend before starting another serious romantic liaison (but I can't guarantee for the following books). Something I appreciate a lot and gives a breath of fresh air to the UF genre. Also the storyline was quite original based on, as the title suggests, people's ability to tamper with someone's mind and well sanity. The book is kind of a thriller/mystery with one person (Justine) caught in a game between two gangs/criminals. The romantic subplot didn't take central stage for which I'm grateful because I wasn't eager to follow Justine's love life. So all in all I would suggest to give this book a try.

However, despite liking it a lot certain things annoyed me. I didn't like the main character Justine. She acted irresponsible and has a fickle personality. She also needs more substance because she came across as rather dull so hopefully in the next instalment I will learn more about her and her partner choice. [I don't like Otto Sanchez because he's the main cause the book went downhill. His appearance triggers turn of events I can't really appreciate, for example the dreaded love triangle and Justine's incomprehensible infatuation with Otto. The romance and [Justine first sex scene with Sanchez is still a puzzle to me. Euhm, you're sleeping with a criminal you know zilch about. Also the book has a strong moralistic undertone which is inevitable considering the plotline. Bottom line the book revolves around vigilantes (= the desillusionists) punishing criminals by basically brainwashing them. The aim is to reform criminals rather than avenging crimes, regardless of the fact that brainwashing people without having the law behind your back is a criminal act in itself. There's a lot of self-righteousness in what they are doing and in the end each individual thinks he or she has the moral high ground.

[A] is going around assessing [B]'s prisoners, at least the ones who aren't mass murderers, and deciding which ones can be freed right away- released into his custody, so to speak- and which need to be disillusioned first.

It's a bit strange knowing that the character that goes around assessing the criminals is said in the book to be a criminal himself. It's kind of a vicious circle. Maybe there will be more on that in the sequel.